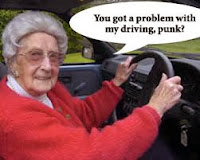 I admit it - I’m fast.  A fast car driver that is.
If you were a teen in the 60’s you might recall Jan & Dean recorded “The Little Old Lady from Pasadena.” I always thought it was kind of a dumb song, until now. Because the reality has set in - I’m her.

The town where I live has a large "senior" population.
Statistically, I’m one of them. Drivologically, not so much.
My motto: never drive slower than your age.
I think I once heard my husband mumble under his breath that the only thing faster than my driving is my mouth. Can’t confirm that’s what he really said, ‘cause he’s still alive.

It’s not my fault I drive so fast. I’ve tried to slow down. In fact, I recently completed a twelve step program for fast drivers sponsored by Accelerators Anonymous.

At first I thought my problem was physical. However, a visit to my podiatrist assured me that my “lead foot” was not a disease…and not curable.

This was further confirmed when my daughter (age four at the time) pointed to a man on the tv and said, “Look, Mommy, he drives like you do.” She was watching a Speed Racer cartoon at the time.

My lead foot affliction makes me resort to great lengths to avoid law enforcement interception. Fortunately, I’ve honed my speed detection skills down to a science.

There’s a dispatch radio in my car that monitors highway patrol car locations. If that fails, I can rely on my hawk-like rapid eye movements that dart from rear view to side mirrors twenty-five times per second. This allows me to spot a hidden patrol car a half mile away. Once spotted, I can moderate my slow down speed to within ten feet of any radar device. Sweet.

Even with all my evasion skills, I did get caught once. The nice officer said I should considered changing the name on my drivers license to Marcia Granetelli. I like it.

But let’s get real. Speeding is not a good idea. Furthermore, someday I’m gonna get caught again. So, to play it safe, I’m headed back to the AA meeting, driving a reasonable thirty miles per hour.  And
like Speed Racer andThe Little Old Lady from Pasadena, I have only one thing to say about that, “Eat my dust!”
Posted by Marcia Smart