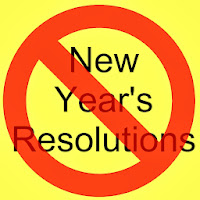 If you’ve made New Year Resolutions, raise your hand.

I gotta ask … what’s the point?


Do you know anyone who’s actually kept a resolution they made for a full year?  I think I tried it once, for about ten minutes.

According to Parade magazine, we have the Babylonians and The Roman Empire to thank for this not-so-favorite holiday tradition. How they managed to scroll resolutions while trying to conquer every country on the planet is beyond me.

Parade also shared that the success rate of keeping your resolutions is eight percent. I would have guessed more like negative two percent.

This prompted me to research more resolutions info on the web. I know, I should probably get a life, but it beats putting away Christmas decorations.

The British “Social Entrepreneurs” offered some interesting resolution twists, however. Of course, I have no idea what a social entrepreneur is, but heck, they sure intend to make a difference.

For instance, one person is “going to be focused on understanding what spreading social innovation looks like in different contexts, particularly where actors have different levels of control – what are the distinct challenges associated with growing a practice through an umbrella organization, or trying to replicate a specific intervention in new contexts?” Blimey!

There was one social entrepreneur who actually made a resolution I could relate to, “My resolution is to seek out good wine and in particular, co-operative wine.” Right on!

Let’s face facts, no matter where we’re from, we hate making those lousy resolutions and we hate ourselves even more for not keeping them. So again, what’s the point?

To that end, I’ve decided to share my Top 5 resolutions I have no intention of keeping.

I tried it once for Lent. Practically the worst forty days of my life. When it was over, I ate a two
pound box of candy in one sitting.

Maybe if I understood why I needed to do this, I might be motivated to try.

No matter what the food-kick-of-the-month is here in CA, I have no intention of eating kale in
any way, shape or form.

Until they figure out how to broadcast Days of our Lives and Downton Abbey telepathically,
ain’t gonna happen.

I already clip coupons, clean my own house and dye my own hair. What more could you
possibly ask a woman to sacrifice?

Works for me.
Posted by Marcia Smart

Email ThisBlogThis!Share to TwitterShare to FacebookShare to Pinterest
Labels: The Holidays