Tales of Woe from a Remote-Totin’-Tube-Rat

I would like to propose a moment of silence for all the dearly departed TV shows that won’t be returning until fall.
As a certified remote-totin’-sleep-deprived-tube-rat, I’ve already been experiencing withdrawal since my favorite seasonal series ended last week. I ponder what summer fill-in shows will amaze me as much as The Amazing Race or how I’ll survive until Survivor returns.

“I can set up a campsite in our backyard and toss some soggy rice your way until the new season starts,” hubby Garth generously offered.
“Gee, thanks, Hon. But if it’s all the same to you, I’ll try watching the Travel Channel while sucking on dried bugs to get me through the next few months.”
Mentally pairing the ladies in my jazzercise class is a paltry substitute for Dancing with the Stars (Dance Mom’s re-runs will have to suffice instead) and the chances are slim- to-none that I’ll tackle complicated cooking projects waiting for Top Chef to return.
Of course, it’s not just the reality shows I’ll miss. Who will I drool over now that Mad Men’s Jon Hamm (aka Don Draper) is off the air for another year? Where will the intrigue come from now that The Americans are probably on vacation in Russia, The Blacklist has gone dark, and Revenge has run out of revengees? Believe me, NCIS re-runs are not filling the void.
Please don’t get the wrong impression. It’s not like I’m addicted to the boob-tube or anything like that. Heck, I can quit anytime I want to. But there was that one time I missed a free trip to Vegas because America’s Next Top Model was starting and my DVR was already filled to capacity. Tyra Banks never would have forgiven me if I’d missed the new cast line-up.
Salem (that scary show about witches) has been a decent stop-gap to feed my craving for the macabre. But I’ll be waiting with baited breath until American Horror Story, and Bates Motel come creeping back into my living room again.
Of course, there’s always good ol’ Days of Our Lives to tide me over during the day. And The Bridge and Rizzoli &Isles will temporarily fill the good-guys vs bad-guys shows vacancy.
Still, it’s gonna be a long, hard summer.
Guess I’ll just have to be The Good Wife, and find some Glee in the fact I’m not The Biggest Loser in Fargo and my only Major Crime is loving my HDTV too much. 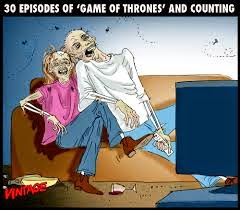