How I Spent My Summer Vacation? 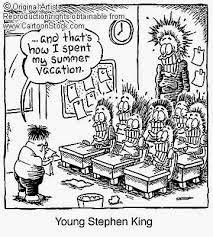 Smart’s Snippets has been on hiatus. That’s “industry” talk for the months-off-down-time between filming television series episodes.  In less glamorous terms, it means “what the he* * happened to summer?”
Is it just me, or have you noticed that “the older you get the faster time slips away” adage is coming to roost in your henhouse, too? I know my memory is headed south, but I swear, one day I was sitting at the computer churning out a Snippet, next thing I know, I’m scheduled to get up at 6am to join my Granddaughter for a grandparents-back-to-school breakfast.
My guess…summer was probably lost in some kind of weird time-warp thing.
Regardless, other than the usual lazy, hazy days of summer lollygagging, I can’t tell you, exactly, what transpired this past summer. Certainly I must have done something to make the last few months pass so quickly. Hmmmm.
I caught up on some mindless reading material like Koontz, Patterson and People Magazine. Helped hubby, Garth, figure out 101 ways to avoid using water and electricity due to soaring costs of utilities and the So. Cal. drought (that was fun).  Sewed on a button. Went to the carwash.
I did make a pilgrimage to my native Motherland, however (not Russia …the Chicago suburbs…almost the same thing).  I was there just short of three weeks. But it took me longer than that to prepare for the trip. So, that easily accounts for seven weeks of passing summer days.
Of course, there was the jaunt on Steve Wynn’s yacht, Allegro, the quickie shopping trip in Paris and the week basking in the sun with Clooney on Lake Como (Amal was busy getting ready for the wedding).  That explains it. Time sure flies when you’re having fun!!
And what did YOU do on your Summer Vacation?
Posted by Marcia Smart