I’ve got a pain in my neck. No, not Garth (although sometimes …) I mean a real pain. 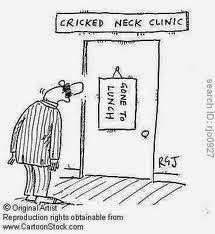 Whenever I pounded the keyboard on the ole laptop, an agonizing pain in my arm would scream at me to S-T-O-P.  I tried to ignore it, but when my elbow locked in place at a 90º angle, and I couldn’t raise my arm higher than my right boob during Jazzercise class, I thought a little visit to the physical medicine doc might be in order.

Okay, the arm pain never actually got that bad. But it ached enough to keep me tossing and turning all night (isn’t that a song?).

Doc did a few arm-strength tests and when I almost pushed him across the room during one of them, he declared me pretty strong for someone “my age”. I inadvertently neglected to tell him I’ve been moving furniture around for fifteen years in my Redesign career and have the upper body strength of a Sumo wrestler. Ooops!

Anyway, he declared that my neck was giving me the pain, not Garth or my arm, and referred me to an acupuncturist and physical therapist. Guess a prescription for Oxycodone administered with a whiskey chaser to dull the pain wasn’t in the cards. 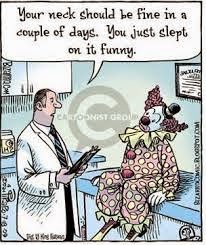 So, I’ve been (mostly) doing the exercises (all two of them) and having a delightful time trying to re-program the way I sleep. I do this by eliminating a pillow and lying on my back in, what Garth calls, a “Cleopatra the Mummy” position. It’s kind of starting to work.

That’s the latest scoop. Since the Snippets summer hiatus has now extended to almost Thanksgiving, I felt compelled fill you in on why my musings have been few and far between of late—just in case you missed me :)

Ouch! My arm hurts now. Guess that means it’s time for another round of exercises. Sigh.

Hey, life’s tough when you’re a drama queen living with a pain in the neck.
Posted by Marcia Smart